Growing chillies and capsicums is cheap and fun – they come in so many different colours and varieties, and growing your own means you save your grocery bill. This article takes you through the main points. Enjoy!

Growing capsicums – which ones should I choose?

If you are thinking of growing capsicums, have a think about which ones you would most like to grow. Sweet capsicums are the large, round capsicums, also called capsicums, that can be stuffed and cooked, or sliced in salads. Before they ripen, they are usually green, and mild in flavour. They then turn red, yellow or purple as they ripen. They have a sweeter flavour when fully ripe. For a colourful display, choose a mixture.

Chilli capsicums, the fiery fruits used in curries, chutneys and pickles, are tender plants and should be grown in a greenhouse, although I never heat mine. Sow in March on a windowsill, pot them on when they are
about 2 inches tall, then gradually harden them off – this means moving them into the greenhouse for a few hours each day, until you pot them into their final position in the greenhouse.

They can be grown in pots of compost or in growbags. To encourage strong growth, pinch out the growing tips when they are about a foot high.

Growing Peppers – Harvesting Use scissors to gently cut the fruits from the vine – you don’t want to damage the plant by roughly pulling the fruits off. Harvest regularly to encourage more fruit to grow and ripen.

The amount of water that sweet capsicums receive has a direct affect on their flavour. If you are aiming for a mild flavour, give them plenty of water – you need to do this in any case if the weather is hot.

If you want to grow really hot chilli capsicums, reduce the watering for a couple of weeks before harvesting – this will intensify the heat – read on to see what happened when we left the chillies on the plant for months before having a little taste!

I have been growing capsicums and chillies for quite a few years now, and I find in Scotland, for some reason, it’s the fiery hot chillies which perform the best. I don’t know why this is, since they originally come from Mexico!

Last season we never got round to harvesting all the chillies – we had loads of ideas – organic chilli oil, chilli paste- stuff like that using them up as we went along. Today we were ordering chilli seed and thought about saving seeds, so we had a look at the viability of the seed in the greenhouse from last year’s plants and you can see what came out of just one pod!!!

These are the hottest chillies we have ever grown!! Even a taste of the skin without any seeds blows your head off!

These capsicums are growing happily in Scotland in the middle of December – honestly! They had little white flowers that are beginning to grow into capsicums – it’s an experiment – total wrong time of year I know, however I am trying to show you just how easy it is!

Chillies and capsicums are grown in exactly the same way – she started off 3 seeds in tiny pots, and has repotted them once. They have not been repotted into bigger pots yet, however they need to be – into pots just a bit bigger. The fresh compost will give them a bit of a feed, if it was Springtime, she could leave the repotting, however as she is trying to keep these going it would be a good idea.

She waters them just once a week – they live happily on her bedroom windowsill, come Springtime we will harden them off and move them to the greenhouse – it will be good to find out if they beat the Springtime sowing – I’m sure they will!

I used to think that all chillies were the same, however since growing capsicums and chillies myself, I have realised just how wrong I was! You can get hundreds of different types, with flavours ranging from hints of peach and crisp apple, to some that have a really robust, long-living heat that stays on your tongue for ages, causing a sense of vigour and well-being!

When you are selecting chilli seed, or even picking some chillies from the store to use in your recipes, it’s good to remember – size matters!

They would be great to liven up a pizza, or to put in a chilli sauce, and go for something in between the 2 if you want to make these great chilli poppers!

Some hot chillies!
Philadelphia Cheese or supermarket own brand – regular or low fat – it’s up to you – (you won’t be able to taste it!!!)
Beaten egg
Fresh breadcrumbs
Hot oil for frying

Score the chillies all along their length with a fork some other sharp object – you are trying to make a rough surface for the egg and breadcrumb mixture to adhere to.

Cut off the end of each chilli, and carefully remove the centre with a sharp knife, leaving the whole pepper in tact

Stuff the chillies with cool, creamy cheese, then dip each one – first into the beaten egg, then into the breadcrumbs and put to one side – you may need to use your hands to really press the breadcrumbs on to each chilli!

Heat up your oil to very hot, then quickly fry your chilli poppers for only a minute or two – you are trying to cook the outside so it’s nice and crispy, whist keeping the middle cold!

Now you are ready to see who can eat the most hot chilli poppers!

Wear silicone gloves when handling chillies – and don’t rub your eyes (or any other vulnerable part of your body) afterwards! It’s the white membrane, as well as the seeds, that contain the heat so if you are trying to tone things down, remove that along with the seeds!

If you are a chilli lover, like James, and you swallow a sauce which is rich in chilli flavour, you will experience a sense of intense pleasure as the heat of the chilli washes around your mouth, leaving a wonderful aftertaste you can’t find anywhere else. It might sound strange if you have never tried it, however a hint of chilli in chocolate takes it to another dimension!

The best way of preserving chillies is to dry them – get a needle and thread, and simply thread your chillies on and make a string of fruits like the one in the picture – hang this up in a cool, dry place where they will dry happily over a few days – they look fantastic too, and give your kitchen a rustic feel! You can make them into chutney, or use them to make flavoured oil – take a bit of time over your presentation, using attractive bottles, and you will add to your cooking pleasure every time you use it!

These flavoured oils are fantastic sprinkled over a woodfired pizza or to liven up a dull salad, or enrich your baked potato! So have go at growing chillies – you will get so much out of it, and really enjoy the whole experience, from sowing that tiny seed, to stringing up your harvest – when you use ingredients that you have grown yourself, the sense of satisfaction you feel at every stage of the cooking process is hard to explain – suffice to say, I’ve never met anyone who has ever tried it, who doesn’t rave about it!

Born in Australia, Sarah currently lives in the USA with her husband. 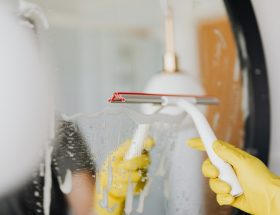 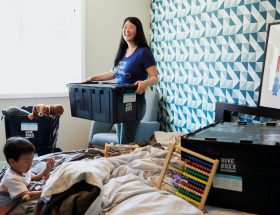 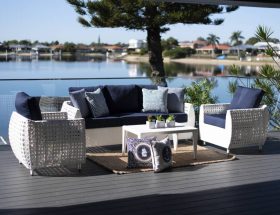